Welcome to the page dedicated to Universal Hall and the resulting live album Karma To Burn.

* If you happen to have a piece of Universal Hall or Karma To Burn memorabilia that is not shown here, please send a photo on and it shall be added. *

*To see some fabulous photos, show posters and to read about the Findhorn Foundation please see the following Page on this Fan Site.*

☄ Mike Walking In Snow At Findhorn ☄

This Page is split into several sections for quick and easy access.

A brief overview on the album's creation.

Here you will find the standard release and promo CD's.

Here you will find the standard release and a pre-release CD.

A selection of Universal Hall - Karma To Burn merchandise and memorabilia.

The album was recorded in Findhorn in Scotland and many of the songs were premiered within Universal Hall itself, over the many concerts Mike played there, whether solo, as a duo with Richard Naiff and with the Waterboys. Universal Hall is packed to the brim with majestic sweeping songs, richly textured and with lyrics that conjure up vivid imagery in the listener's mind's eye.

The Universal Hall album was released in Ireland and elsewhere in June 2003.


☄ Steve & Richard At Work In The Studio At Findhorn ☄

The resulting tour over the next couple of years was a combination of acoustic and electric shows. Some shows were all acoustic with the trio of Mike, Steve and the great Richard Naiff on keyboards. Other shows were a half-and-half affair; the first set would be the trio of Mike, Steve and Richard while the second set would be all electric with the addition of Geoff Dugmore on drums and Braid Waissman on bass.

For the big Autumn 2003 tour the rhythm section was Carlos Hercules on drums and Steve Walters on bass. They were a very powerful and very brilliant duo and they brought a funkier sound into the band, as anyone who saw a show on this tour, or who saw the band between Autumn 2003 and 2006 on the Universal Hall and the Karma To Burn tours will testify.


The acoustic / electric shows in 2003-2004 also saw the mighty trio dust off some classic Waterboys songs including jaw-dropping, roof-raising versions of The Pan Within* and The Return Of Jimi Hendrix*.

* The Karma To Burn live album was recorded in the UK and Ireland between October 2003 and November 2004.

* You can check out each and every one of these individual setlists from 2003 and 2004, on the official Mike Scott and The Waterboys site...mikescottwaterboys/archive/setlists/2003

A full page press promotion for Universal Hall in a music magazine. 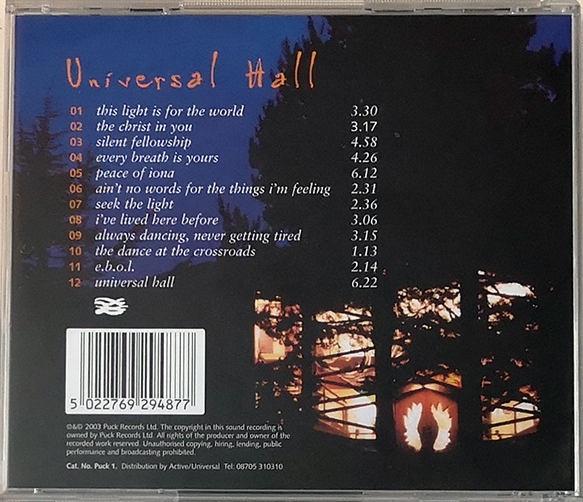 A promo album disc in a wraparound paper sleeve.

An advance album promo with altered artwork on back sleeve and on disc.

Press promotion for Karma To Burn in a music magazine.

Karma To Burn is a live album that was released in September 2005. It was compiled from a number of shows in Ireland and the UK between October 2003 and November 2004. It gives a great cross-section of just some of the wide variety of songs played throughout the Universal Hall tour. An essential acquisition.

The Songs were recorded in the following venues:

* You can check out the setlists from the Karma To Burn 2006 tour on the official Mike Scott and The Waterboys site...mikescottwaterboys/archive/setlists/2006 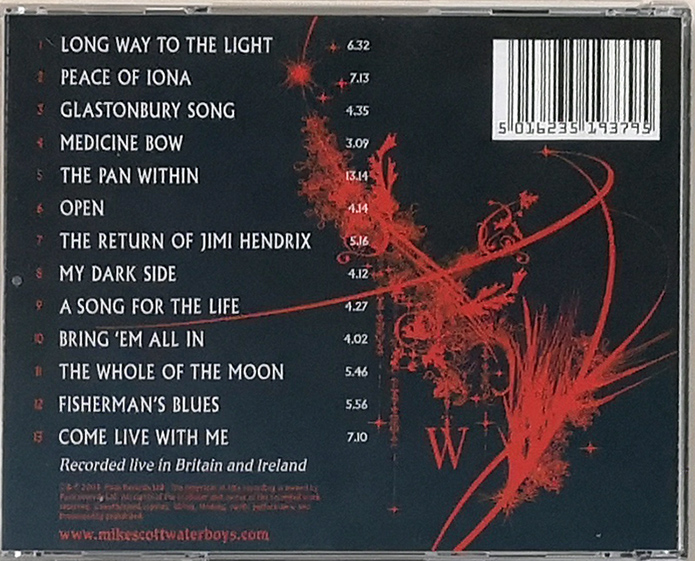 This is a pre-release copy of the album in a paper sleeve.

This was the only single released from Universal Hall. It was released on July 7th 2003 and it contains three tracks, the title track This Light Is For The World and two others which were unreleased, Winter Blows and a cover of the Bruce Springsteen song Independence Day. It is not difficult to find and is well worth getting for these two extra songs.


☄ 'This Light Is For The World' One-Track Promo ☄

This is a one-track promo issued to radio stations.

The Universal Hall title track was given away with an issue of the Caduceus Magazine. This publication is "a healing, spiritual magazine focusing on psychological, emotional, spiritual, ecological and environmental health, therapy and growth, including natural, holistic, energy and complementary medicine". 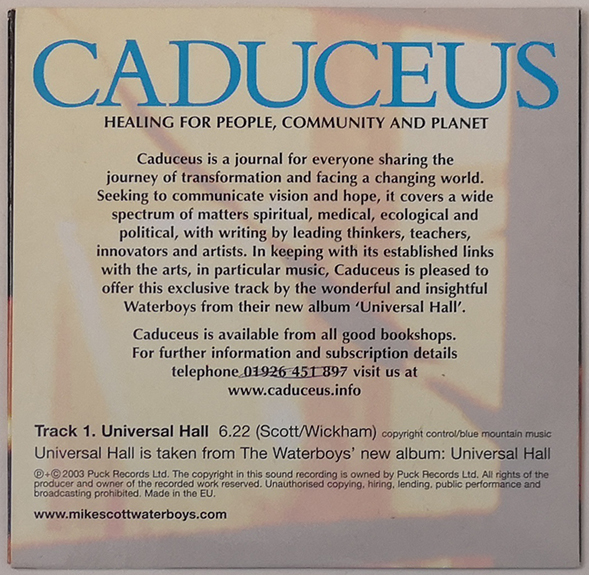 A Universal Hall tour laminate issued to band and crew from October 2003.

A much-loved album logo t-shirt with dates from the Tour in 2003.

Another poster from the two shows on June 22nd 2003 in Universal Hall, Findhorn.

The band played a huge number of shows in 2003, including several appearances in Ireland, with extensive dates across the UK and Europe and the USA.

T-shirt with dates from the Autumn Tour in 2004. Thank you Cor.

Large signed poster listing the Irish and UK dates from the October Tour in 2004.

A t-shirt from the Karma To Burn tour with Irish and European tour dates.

A polo shirt from the Karma To Burn tour.

Findhorn poster for a two-night stand in Universal Hall in Findhorn, Scotland on June 24th and 25th 2006.