This CD Singles page features a chronological selection of all of The Waterboys CD Singles. Likewise, included here are every one of the Mike Scott solo CD Single releases.

Most (if not all) of The Waterboys and the Mike Scott CD singles that have been released to date, contain a number of exclusive songs that are unavailable elsewhere, and are therefore highly desirable by any Water person who wishes to acquire more rare songs!

There are various Promo CD's, Pre-Release, Advance CDs and other rare items on the Memorabilia Page.

The newest and best Facebook group The Waterboys & Mick Puck was created by two genuine lifelong admirers of the band.

This group was created for YOU the fan as a place of friendships where your opinion and input are greatly valued.

You will find all the latest news, photos, videos, memorabilia, Exclusive Group Competitions and much more besides. The page is already laden with unseen treasures that will not be found anywhere else online, with much more to come.

So why not join us and be a part of something truly special? All Aboard! The Waterboys & Mick Puck - Facebook Group - Click Here!


There were two versions of the Fisherman's Blues CD single released and they had different cover sleeves as well as different tracks.

This particular Fisherman's Blues CD single is from 1988 with a great song 'Lost Highway' as the extra track.

The 'Lost Highway' song was also a regular in the set lists back in the old days.


Unsurprisingly the song 'Bang On The Ear' became somewhat of a Waterboys anthem when it was released back in 1988.

It is backed by a wonderfully raucous live version of 'Raggle Taggle Gypsy' which incidentally, was recorded in the Barrowlands in Glasgow.

The single was released in two CD formats, both as a three inch and a five inch single.


The Germany only release of 'How Long will I Love You' in a unique green sleeve.

The single is complemented by two extra songs,'When will We be Married' and 'Come Live with Me'.

This CD single is not too easy to track down.


This is the second release of the Fishermans Blues CD single and this version dates from 1991.

It is a three track single and includes a wonderful live version of 'Medicine Bow' recorded at the BBC on November 20th 1985.

'Lost Highway' is the third track on the disc.


This single was taken from the 'Room To Roam' album.

There are two versions with a different cover sleeve and both feature different bonus tracks.

There are two extra tracks on this version. Fishermans Blues and Medicine Bow, the latter which was recorded by the BBC on November 20th 1985.


Another version of the single from the 'Room To Roam' album.

This is the second version with a green cover sleeve and featuring different bonus tracks.

The two extra tracks on this version are Something That is Gone and Come Live with Me.

This is the German release.


This song (along with Fisherman's Blues) is probably the most well known of all the songs in The Waterboys canon, and always causes a huge stir when it is played at a live show.

This released version dates from 1991 and it is backed with 'The Golden Age Medley' which consists of four songs, A Golden Age, Higher In Time, High Far Soon and Soon As I Get Home.


This song was the first song to be taken from the fantastic 'Dream Harder' album and it is backed with three excellent unreleased songs.

The unreleased songs on this CD are 'Chalice Hill', and the wonderfully named 'Burlington Bertie and Accrington Stanley'.


Another great single release from the 'Dream Harder' album, The Return Of Pan is backed with two more unreleased songs.

These songs are Karma and Mister Powers.

There is also a version of this single with a 'Hidden' track included of The Return of Pan (Demo Version) although it is not listed on the disc or the sleeve.

'My Love is my Rock in the Weary Land' and the second track 'Trouble Down Yonder' is exclusive to this release. And lastly, the third song is a long version of 'Send him Down to Waco'.


The first Cd of this two part 'We are Jonah set contains three songs.

'We are Jonah'(Single Mix) and 'Lucky Day/Bad Advice' and the third song is a Live version of 'Dumbing Down the World' from Glastonbury 2000. This last song is exclusive to this release and unavailable elsewhere.


The second disc of this two part 'We are Jonah CD set again contains three songs.

'We are Jonah'(Single Mix) and the second track 'Martin Descent' is exclusive to this release. Lastly, the third song is a long version of 'Send him Down to Waco'.


Not too difficult to find, but well worth seeking out for the two extra songs on the disc. An electrifying live version of 'Killing My Heart' from the Olympia Theatre Dublin in 2006, on which Steve and Richard reach soaring heights of brilliance! This song did not make it onto the 'Karma To Burn' live album but it can also be found on the 'Sound Of Cloud' CD.

In closing we are treated to a beautiful live version of the George Harrison classic 'All Things Must Pass' which was recorded on Radio Bremen in 2003.


This is a one track promo CD in a card sleeve.


This is a one track promo CD in a striking sleeve.


This is a one track promo CD distributed to radio stations.


This is an extremely rare record company Reference CD of a live recording of Strange Arrangement.

This live track never got a commercial release and is unavailable anywhere, apart from on this CD.


This is a one track promo CD in a card sleeve.


This is a one track promo CD in a gatefold sleeve with 2012 UK and Irish tour dates listed.


This is a one track promo CD in a colour sleeve with album artwork.


This is a one track promo CD in a plain text only sleeve.


This is a one track promo CD in a colour sleeve.


This is a Out Of All This Blue five track promo CD EP in a colour card sleeve with album artwork.


This is a one track promo CD in a full colour card sleeve.


This is a one track promo CD in a colour card sleeve.


This is a very hard to find one track promo CD in a full colour card sleeve.


This is a very scarce one track promo picture CD in a plain jewel case.


All of the Mike Scott CD singles are well worth acquiring as they include exclusive non-album tracks as well as demos and live takes of some songs. Essential. 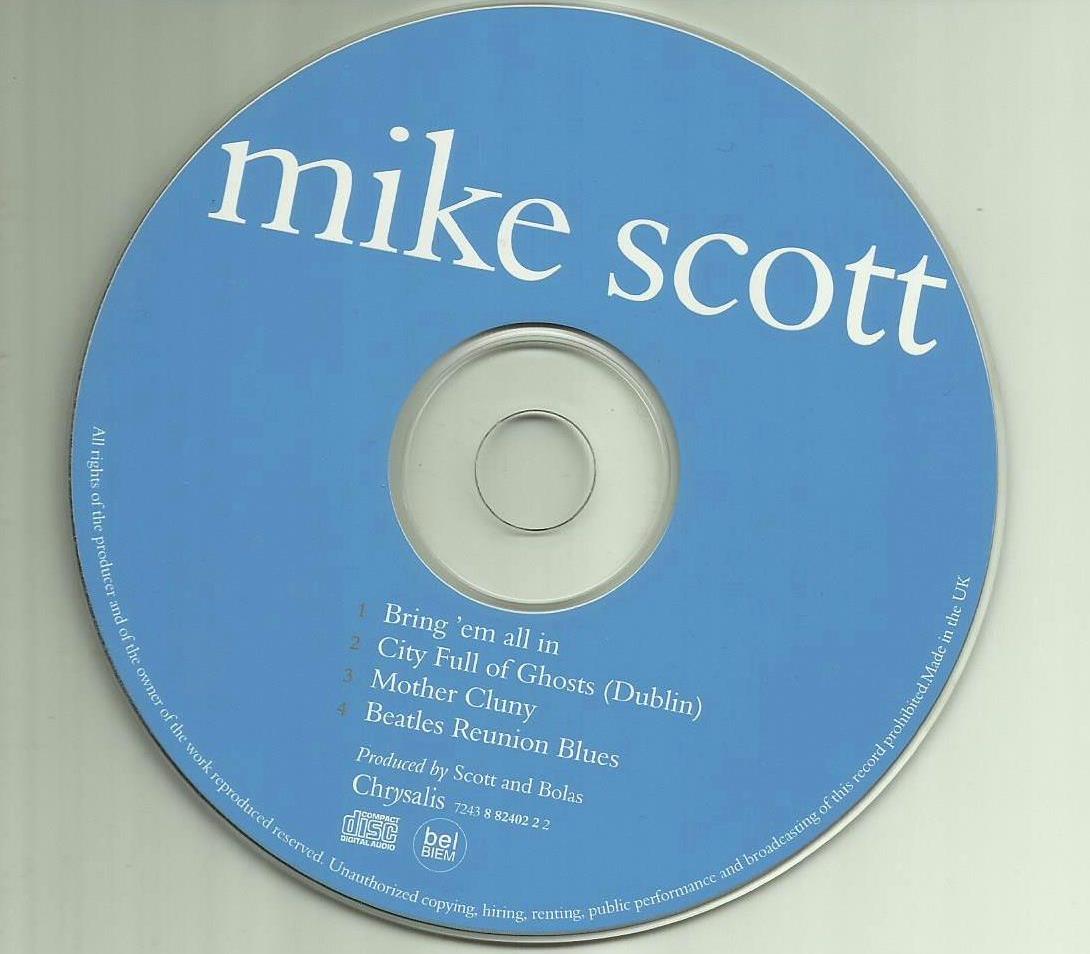 The title song 'Bring Em All In' was the first CD single to be taken from the first ever Mike Scott solo album of the same name.


The song 'Bring Em All In' was released as a Maxi CD single in the US in a red sleeve. This version contains five songs of which four are unreleased.

Apart from the 'Mother Cluny' and 'Beatles Reunion Blues' songs, it also contains 'Two Great Waves' and 'My Beautiful Guide'.


The second single from the 'Bring Em All In' album was 'Building The City Of Light'.

This single was released as a double CD set which were both sold separately.

CD1 contains one unreleased song 'Where Do You Want The Boombox, Buddy' and two live songs 'Goin' Back To Glasters' and 'The Whole Of The Moon'.


The second part of the set contains the title song, 'Two Great Waves', 'My Beautiful Guide (both of which are only available on the US "Bring Em All In" Maxi single described above).

The last track on the CD2 single is a fabulous outtake of 'Building The City Of Light' (A Universal Hall Demo).


The first single from Mikes' second solo album 'Still Burning' was 'Love Anyway' and this was also released as a 2 CD set which was sold separately.

CD1 contains the title song plus two unreleased songs. 'King Electric' (including Moonage Daydream) and 'Blues Is My Business'.

These songs are 'Big Lover', 'Careful With That Melletron Eugene' and 'Since I Found My School'.


The second single from the 'Still Burning' album was 'Rare, Precious And Gone' which like the last few single releases was issued as a 2CD set also sold separately.

CD1 contains the title track plus 'Kiss The Wind', a live rendition of 'When Will We Be Married?' and a full length demo of 'Love Anyway'.


The second part of this excellent 2 CD set contains the title track plus two live songs and one last unreleased song.

These songs are 'All The Things She Gave Me' live in October 1995, and 'She Is So Beautiful' recorded live in San Francisco on March 27th 1996.