This page contains a selection of concert posters from throughout the years, 1979 to the present.


* If you happen to have a Concert Poster with different artwork than those on display here, please send a photo on and it shall be added. *

It would be wonderful to have a concert poster displayed from each calendar year but this can only happen with YOUR help.


This extensive Gig Poster Page is split into yearly sections for quick and easy access.

A signed poster from a very special show in The Subscription Rooms, Stroud. Thank you Crispin.

Poster from the third and final show of a short Scottish tour in The Barrowland Ballroom, Glasgow with fabulous support from Psyche, who are Mike's old mates from Ayr, with Midge on guitar, Arnie on keys and Stoker on bass.

Two posters for the special one-off show for Gavin 'Fingers' Ralston on the 1st of April 2019 in Vicar St, Dublin.

A one-off gig by Steve and The Beekeepers in Carrick-on-Shannon, County Leitrim , Ireland.

A full listings billboard for the Fever Pitch Festival in Galway on June 1st 2019.

A full listings poster for the Fairport Convention Cropredy Festival in August 2019.

A gig listings poster for the Scottish Tour in September 2019.

Poster from the two-night stand in Vicar St, Dublin on December 3rd and 4th 2018.

An Out Of All This Blue UK Tour poster listing all of the April-May 2018 dates.

A large fully signed Out Of All this Blue poster from Autumn 2017. The poster has been signed by Mike, Steve, Ralph, Brother Paul, Aongus, Zeenie, Jess, Bart Walker and Jon Green.

Poster from the first-ever concert by the band in Poland. - Warsaw June 2016.

Poster from a special one-off show by Steve and Friends in the Hawk's Well Theatre in Sligo on November 25th 2016.

A Modern Blues Tour poster from Shibuya, Tokyo in April 2015.

Poster for The Wickerman Festival held at Dumfries and Galloway, Scotland in July 2015.

Poster for show in Albacete, Spain on September 17th 2015.

A poster for one of the final Modern Blues shows in Southend, England on December 4th 2015.

A venue poster for the four-night stand in Vicar St, Dublin in November 2015.

Venue poster for a special benefit gig for the late Hughie Purcel in Whelans, Dublin on April 13th 2014.

Lovely poster for the Galway Arts Festival in July 2014.

Special poster for the Isle of Wight Festival in 2014.

A full listings poster for the Fairport Convention Cropredy Festival in August 2014.

Venue poster for the first-ever Modern Blues show in Limerick on December 3rd 2014.

A poster from the first-ever Australian tour in 2013 listing all of the January dates.

This was an extensive tour taking in a total of five cities and six concerts.

A Fisherman's Blues Revisited poster from Padova, Italy in November 2013.

A English tour poster for An Appointment with The Waterboys from March 2012.

A Scottish tour poster for An Appointment with The Waterboys from April 2012.

A signed venue poster for the book launch which is on display in the Roisin Dubh in Galway. The show was on June 13th 2012 with some very special guests.

You can read more about the Strange Boat Foundation Here.

A poster from one of the Reading and Music gigs with Steve. This poster is from The Holy Trinity Church, Westport, County Mayo, Ireland on November 9th 2012.

A signed poster from the An Apointment with The Waterboys Tour.

Venue poster for The Ramsbottom Festival in Manchester, England in September 2011.

☄ An Appointment with Mr Yeats - A World Premiere - The Abbey ☄

A venue poster from the An Appointment with Mr Yeats World Premiere five-night residency in the Abbey Theatre Dublin in March 2010.

A venue flyer from the An Appointment with Mr Yeats show in the Opera House, Wexford, Ireland on November 5th 2010.

Venue poster for a special benefit concert for the Tuesday's Child Charity in Vicar St, Dublin on February 6th 2009.

A large format original Concert poster for a show in Gaia, Portugal on March 14th 2008. 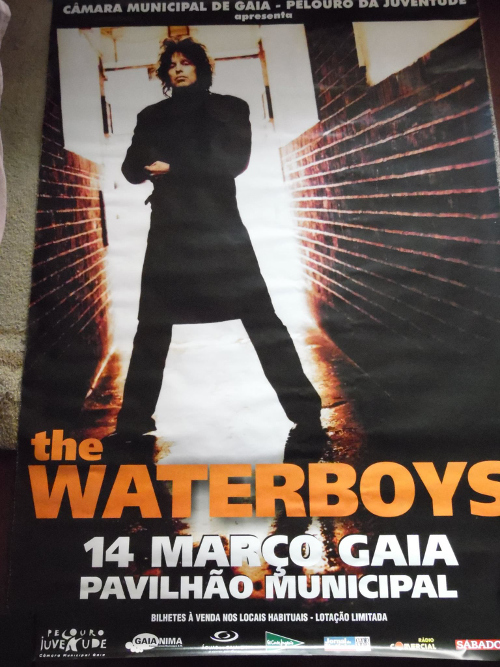 A gig poster from the Norwegian BoL tour in Drammen on August 21st 2008.

This concert poster is a complete one-off piece. It is a giant-sized poster made of tough plastic and to be displayed outside or above the concert venue.

This unique piece of artwork was made to promote a show in Dag's hometown of Fredrikstad, Norway in 2008.

A UK 'Book of Lightning' tour date poster from April 2007.

A Scottish tour date poster from May 2007.

Findhorn poster for a two-night stand in Universal Hall in Findhorn, Scotland on June 24th and 25th 2006.

A large poster from the acoustic theatre tour of Belgium in 2004 listing all of the January dates.

This was an extensive tour taking in a total of six concerts.

A fully signed poster from the show in Chiari Italy on March 20th 2004.

Findhorn poster for a two-night stand in Universal Hall on June 20th and 21st 2004.

Poster from the Chasse Theatre, Breda, The Netherlands on October 5th 2004.

Large signed poster listing all of the Irish and UK dates from the October Tour in 2004.

A venue poster from the Usher Hall, Edinburgh on June 20th 2003.

A poster from the 2003 show in Universal Hall, Findhorn.

They added an extra show earlier that same evening, such was the demand for tickets.

The band played a huge number of shows in 2003, including several appearances in Ireland, with extensive dates across the UK and Europe and the USA.

A Scottish poster from October 2003 promoting the concerts in Glasgow and Aberdeen.

The Festival was curated by the late David Bowie.

A poster from the the first show of 2001 in the Corn Exchange, Edinburgh.

A double date poster from England in 2001.

A striking poster from San Francisco on April 3rd 2001.

A full listings poster from The Fleadh Finsbury Park, London in June 2001.

Glasgow poster from the Barrowland gig on November 7th 2001.

A lovely poster from a show in the Savoy Theatre in Cork city on December 8th 2001.

A rare full listings poster from the tour of Norway in June 2000, noteable for being the very first shows with the relaunched Waterboys band and brand.

A Glastonbury full listings poster from June 2000. The band headlined on the Acoustic Stage.

A venue poster from Ancienne Belgique, Brussels on November 25th 2000.

A venue pamphlet for the famous reunion show in The Hawk's Well Theatre in Sligo on October 7th 1999.

A full listings poster with Mike from The Fleadh Finsbury Park, London in June 1998.

A concert poster from the Stavanger show in Norway on the Still Burning tour.

A poster with tour dates for the Mike Scott Band tour of the UK in October 1997.

Thank you Marc B.

A Japanese Tour poster listing the shows from November 1997.

A Japanese Tour poster from January 1996.

A signed solo show poster from the Paradiso, Amsterdam on 9th February 1995.

A Scottish solo tour poster with unique Artwork from March 1995.

A handmade Concert poster from Dundee on the 11th March 1995. Dedicated fan Alan Pattullo created this poster himself and plastered several of them all around Dundee as he wanted to ensure that the concert sold-out. And it worked! The show was a complete sell-out.

Concert poster from Seapoint, Galway on the 8th April 1995.

Show poster for A Concert For Nepal in Universal Hall, Findhorn on the 20th May 1995.

A two-night stand poster from the Shepherds Bush Empire, London in October 1995.

A two-night stand poster from Findhorn in June 1994.

Poster for the Irish tour in August 1990.

Poster for the Ancienne Belgique show in Brussels, Belgium on October 7th 1990.

Poster for the German tour in October 1990.

Poster for the Spanish tour in October 1990.

Poster for the Dublin show in The Point on St Stephen's day December 26th.

A show poster from the Sports Centre, Longford on December 27th 1990.

A rare poster for the Fisherman's Blues Irish tour with all the January dates listed.

A Steve poster for the Fisherman's Blues UK spring Tour.

A rare poster for the Fisherman's Blues tour with all of the UK spring dates listed.

A gig poster for the October 4th 1989 show in Nijmegen, Netherlands.

Poster for the Claremorris show on December 20th 1989.

A gig poster for the Irish Christmas Tour 1989.

A gig poster for the Irish Christmas Tour 1988 which finished with a three night stand in The Top Hat due to the two announced concerts selling out in jig-time.

A large billboard poster for the show in Horan's Tralee, County Kerry.

A very scarce poster for the Dunnichen Festival in Scotland in May 1987.

A large show poster for the benefit gig in Leisureland, Galway on September 18th 1987. This poster is proudly on permanent display in Tigh Neachtain public house on Cross St, Galway. Drop in for a visit if you are within the bawl of an ass.

Concert poster from the two-night stand in the Olympic Ballroom, Dublin on October 6th and 7th 1987 by the artist Pauline Bewick.

Large concert poster from Tiffanys, Newcastle on the 30th April 1986.

Concert poster from Chippenham Goldiggers on the 4th May 1986.

A beautiful and very rare large poster for the Israel Tour in late May 1986. 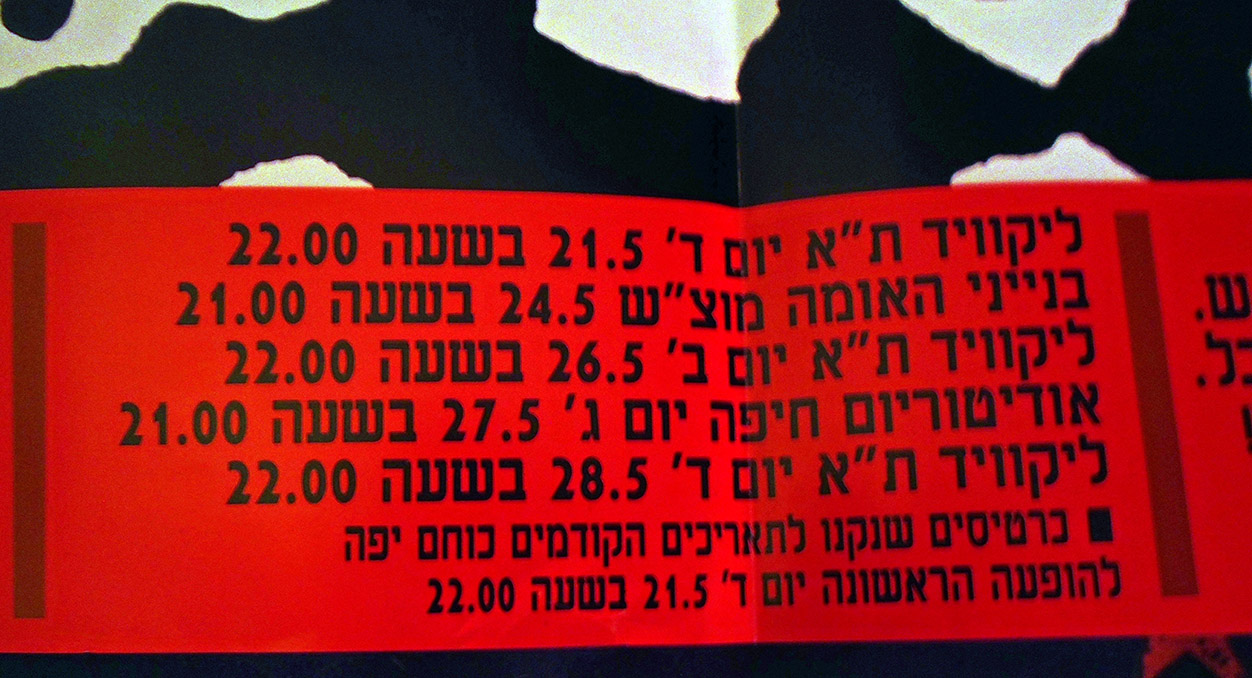 A full listings poster with The Waterboys from The Glastonbury Festival in June 1986.

Belgium poster for the Werchter Festival in July 1986.

Venue poster from Leicester Polytechnic on the 11th October 1985.

A full listings poster for the Glastonbury Festival in June 1984.


A venue poster for The Waterboys in The Escape Club in Brighton on 10th April 1984.

This was only the fifth concert by the band.

This original Waterboys poster with The Big Music imagery is from only the fourth-ever concert by the band in Strathclyde University, Glasgow on the 7th April 1984.

The first-ever show by the band was in The Batschkapp Club in Frankfurt, Germany on the 19th February, with the second show in the Alabamahalle in Munich on February 20th.

A very rare Funhouse show poster (The Ghost of Another Pretty Face) advertising a four gig residency from January and February 1982. The band only played five concerts in total.

A The Red And The Black show poster advertising two gigs from May 1982.

Mike writes: "The art is by John Caldwell, copied from a photo, possibly of Bill Wyman".

Another The Red And The Black gig poster from July 1982.

Another Pretty Face rare gig poster, designed by Laurie Evans, for a show in The Astoria, Edinburgh on 30th June 1980. Laurie did a number of photo shoots with the band.

You can check out her work here: Laurie Evans Photo Archive - Instagram.

A very rare Another Pretty Face poster for a gig at Aberdeen, Queen's Cross Youth Club in the summer of 1980. The term "Kick It Over" was an APF slogan of the day. The support act on the day was TV 21.