Hello Everybody! This page contains details of Fan Site only exclusive current and past competitions that have been ran through the The Waterboys & Mick Puck Facebook Fan Group Page.

Please check out the Tour page for all the latest Live dates! Click Here!

This is a draw for two very special prizes to be given away on the The Waterboys & Mick Puck Facebook Fan Group.

Two 'How Long Will I Love You' 12-inch singles that have been very kindly signed by Mike Scott, Anto Thistlethwaite and Steve Wickham.

These are the only two in the world that are signed by the mighty trio!

These are recent exclusive Competition Giveaways in the The Waterboys & Mick Puck Facebook Fan Group.

Prizes were free pairs of tickets for the October 2021 shows in York and Stockton.

To celebrate the 33rd Birthday of the Fisherman's Blues album we also gave away an extremely rare copy of the Zimbabwe LP.

Yet another exclusive Christmas Giveaway via The Waterboys & Mick Puck Facebook Fan Group will happen in early December 2021 for two highly coveted prizes that you will not find anywhere else in the world!

You really do not want to miss this one!!

To be a part of the grooviest Waterboys Fan Group on Facebook just hit the link and join us:

This was an EXCLUSIVE Competition for The Waterboys & Mick Puck Facebook Fan Group.

Where else would you get it? No where else but here in this group that's where.

Mike has signed each of these CDs, making each one a very special treasure in these strange lockdown times.

Congratulations to the following WaterPeople who each received a signed CD album:

There will be another Competition ran through The Waterboys & Mick Puck Facebook Fan Group down the road apiece....So Stay Tuned!

This Is The Sea - 35th Anniversary

Anto has kindly signed and sketched on each of these 10 original promo postcards, making each one a very unique treasure indeed.

Congratulations to the following WaterPeople who each received a signed postcard:

There will be another Competition ran through The Waterboys & Mick Puck Facebook Fan Group in the coming weeks....So Stay Alert!


Here are two of the winners from recent 'Facebook Giveaway' Competitions in April 2020.

Bradley Arnold from the USA received a Cloud of Sound CD signed by both Mike and Steve.

While Michael Macken from Ireland received a first-press Japanese CD of Fisherman's Blues.

You too, can have a chance of winning some cool stuff, and meeting some real fans and really nice people on the The Waterboys & Mick Puck Facebook Group.

please check it out!

☄ 2 VIP Tickets for Van, The Waterboys and The Hothouse Flowers ☄ 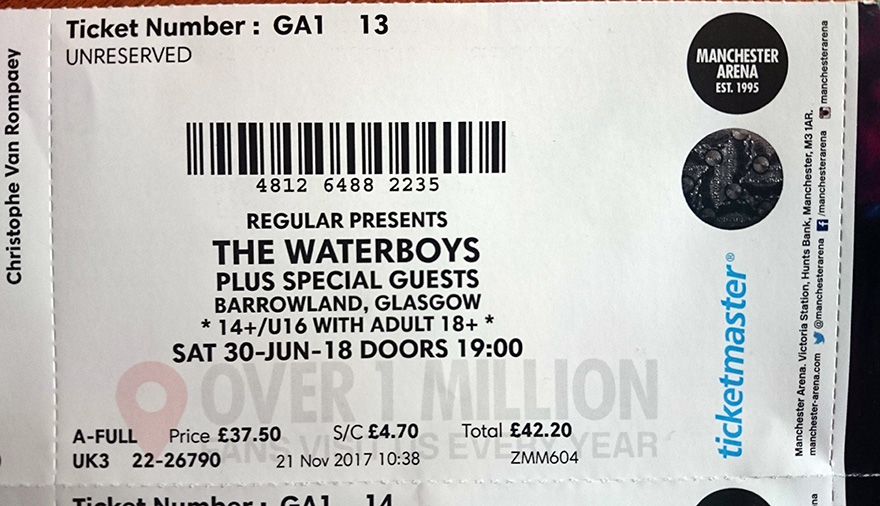 In a first time Competition EXCLUSIVE for the excellent 'Mike Scott and The Waterboys' Facebook Group, Mike and Steve very kindly signed and uniquely decorated 10 copies of the 'Out Of All This Blue' Album to be given away by this Fan Site via the Facebook Group Page by answering a very simple request.

The request was this: "TO WIN ONE OF THESE TREASURES JUST BE ONE OF THE FIRST 10 PEOPLE TO COPY & PASTE A LINK TO ANY OF THE PAGES ON THE 'waterboys.co.nf' FAN SITE IN THE COMMENTS SECTION BELOW."

* HUGE THANKS to Paige O'Neill for listening to this idea with a warm heart and to Mike and Steve who were beyond happy and very keen to make this happen. *

ALL Ten of these unique treasures were safely dispatched to the 10 lucky recipients on 2nd October.

Photos of each of the recipients and their prize have been added below...

Thank you to all who took part or who have visited this Fan Site.

*Update* - Almost seven months ago the 10 specially signed albums were posted off to the 10 competition winners, some as far away as Canada and Australia. And all reached their new homes but one. Unfortunately this one got lost in transit to Italy so the mission now was to try and replace it.

The replacement album was signed by three Waterboys and it was only missing Mike's signature. This album for Donato is extremely well traveled, it has been to shows in England, Scotland and Belgium and to two Dublin shows.

So, enlisting the help of a great friend, the album was sent to Norway where the last signature of the man himself was obtained in Oslo.(Thank you Dag Reinert Johansen and Thank you Mike). And after receiving it by return post, it was sent on to Italy by registered mail.

Donato received his personalised signed album on 24th May 2018. (See photo below).

Thank you to all who entered or have read this piece and for all your support.