A Rock In The Weary Land was released in Ireland on September 22nd 2000 and released in the UK and Europe on September 25th 2000. It had an August 2001 release date in the USA. It was the first album by the newly-reformed Waterboys in seven years.

Thank you to Andy Pritchatt, Colin Eales, Kjetil Olsen and Dag Reinert Johansen for contributing items to this web page.

* If you happen to have a piece of A Rock In The Weary Land memorabilia that is not shown here, please send a photo on and it shall be added. *

This extensive Page is split into several sections for quick and easy access.

A brief overview on the album's creation.

Here you will find various worldwide releases and promo CD's.

A varied selection of worldwide releases and promos.

The only release on vinyl from the original album.

Standard release and a promo.

A selection of A Rock In The Weary Land memorabilia and tour merchandise.

☄ A Rock In The Weary Land - Origins and Tour ☄

The album was recorded in various locations in London between 1998 and 2000. The first time any of the Weary Land songs were played live was the Mean Fiddler / Fleadh double-header in the summer of 1998 with Anto Thistlethwaite and Dave Ruffy in the band. More of the new songs got premieres in Bodo and Milton Keynes in 1999.

In 2000, Mike and Richard Naiff played two shows in Scotland in May also playing some tracks from the forthcoming album. Then the newly-relaunched Waterboys band kicked off their tour playing six shows in Norway in June before a headline show at the Glastonbury Festival where many fans heard the new songs for the very first time.

The 2000 tour kicked off in earnest with a full European tour between October and December 2000. That October also saw Jo Wadeson join the band on bass. It also saw the return of Steve Wickham to the fold at the first show in Dublin on December 12th 2000.

Mike shows us just how happy he is in the Olympia Theatre, Dublin on December 12th 2000.

Steve returned to the fold on a rapturous evening at the first evening of a two night stand in the Olympia Theatre, Dublin on December 12th 2000. This is what Mike had to say of the momentous occasion. 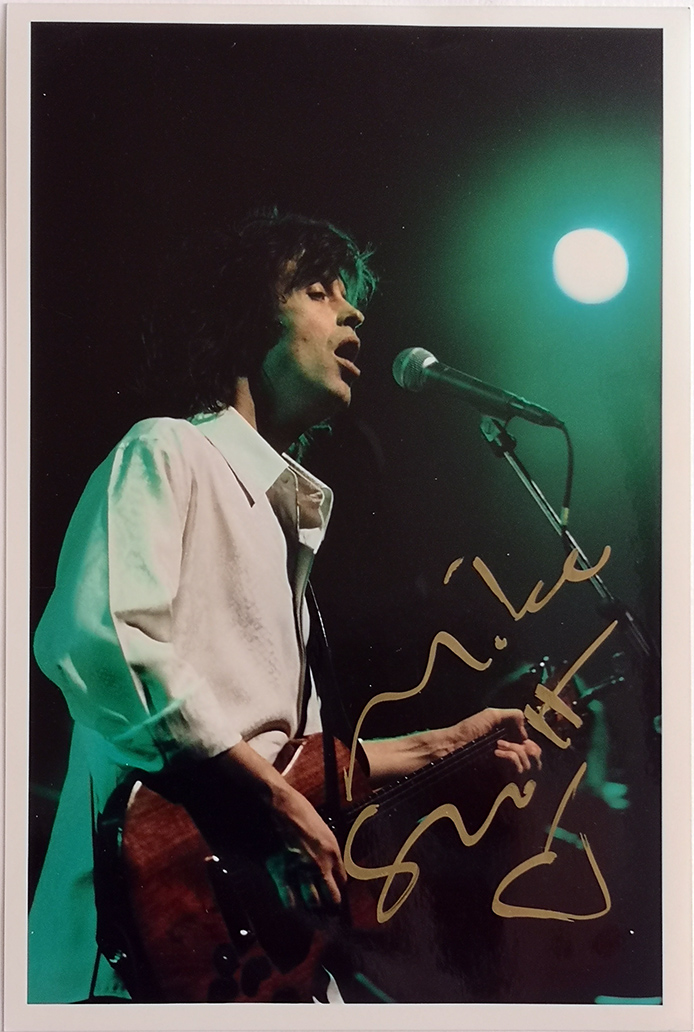 In 2001, the band embarked on a tour of the USA and Canada in March and April. Jay Dee Daugherty, who played on the 1989 tour, rejoined the band as well for dates between March and June 2001, which included the US tour and some European festivals, including The Fleadh, so there were three of the 1989 Waterboys in the line-up for that period. From April through to September they played a lot of the European festivals.

Then in September they went back to the USA and Canada for another extensive tour returning at the end of October. They had barely time to draw breath before they kicked off another European tour on November 1st and then finished the tour with a string of Irish shows ending on December 9th 2001.

This an Irish press advert for the album release on September 22nd 2000.

You can check out each and every one of these individual setlists from 2000 and 2001, on the official Mike Scott and The Waterboys site...mikescottwaterboys/archive/setlists/2000

An alternative photo from the album cover shoot.

One of a series of Weary Land photos for the various music magazine features and interviews.

This is a true one-off. It is an acetate master reference CD from Abbey Road Studios and it is dated June 5th 2000. Both the track titles and the disc have been annotated by Mike. 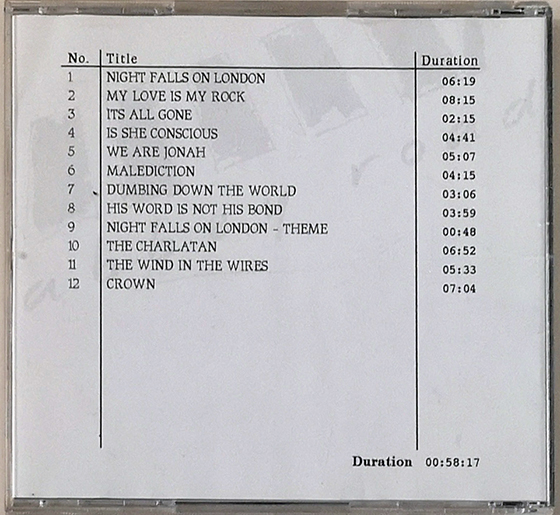 A UK press release and photo.

Original standard issue of A Rock In The Weary Land with twelve songs.

Two UK promo albums of A Rock In The Weary Land with one showing Night Falls On London as the first track instead of Let It Happen. Thank you Andy.

A radio sampler four-track promo in an all black sleeve with UK tour dates printed on the inside of the sleeve.

German promo album of A Rock In The Weary Land.

A four-track album sampler promo in a full colour sleeve with all European tour dates printed on the inside of the sleeve.

A USA press release and photo.

The USA release of A Rock In The Weary Land on August 21st 2001 landed with fourteen songs and a different running order. The extra songs are Lucky Day/Bad Advice and My Lord, What a Morning. Mike regards this release with the extra songs as the definitive one.

A USA A Rock In The Weary Land tour laminate issued to band and crew from 2001.

A lovely USA A Rock In The Weary Land tour itinerary with full colour cover from 2001.

An advance album promo of A Rock In The Weary Land in a card sleeve.

An Advance promo of A Rock In The Weary Land in a jewel case.

An expanded double CD of A Rock In The Weary Land with Lyric booklet and OBI strip included. The second bonus Weary land EP CD contains four extra songs, Lucky Day/Bad Advice, Time, Space And the Bride's Bed, Trouble Down Yonder and Send Him down To Waco. This Japan edition is an essential purchase. 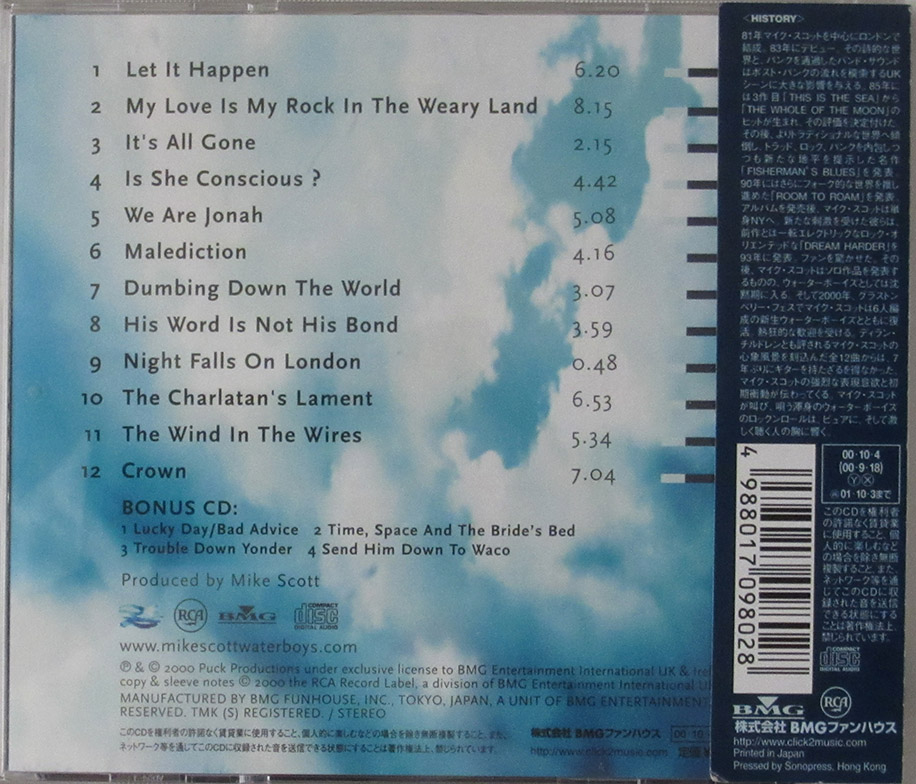 A scarce sample promo double CD of A Rock In The Weary Land with sample promo tag, a lyric booklet and OBI strip intact and lastly, it has Sample printed on the disc.


☄ 'Is She Conscious?' One Track Promo with Unique Artwork ☄

This is a one-track promo with unique cover art.

☄ 'Is She Conscious?' Clean Vocal Promo ☄

A one-track promo with a clean vocal version in a paper sleeve.

This is a one-track promo with same cover artwork as E.P. release.

'My Love is my Rock in the Weary Land' and 'Trouble Down Yonder' and the third song is 'Send Him Down To Waco.'

A one-track promo track edit in a colour sleeve.

A one-track promo track edit in a paper sleeve.

A one-track promo track full version in a paper sleeve.

A one-track promo from the USA with unique artwork on the back sleeve.

A one-track promo with no artwork.

The first CD of this two-part 'We are Jonah' set contains three songs.

'We are Jonah'(Single Mix) and 'Lucky Day/Bad Advice' and the third song is a live version of 'Dumbing Down the World' from Glastonbury 2000. This last song is exclusive to this release and unavailable elsewhere.

The second disc of this two-part 'We are Jonah CD set again contains three songs.

'We are Jonah'(Single Mix) and the second track 'Martin Decent' is exclusive to this release. Lastly, the third song is a long version of 'Send him Down to Waco'.


A one-track promo in a jewel case.

A one-track promo with no artwork.

A UK two-track promo featuring the opening album track Let It Happen and Dumbing Down The World.

Released in 2000, this is a two-track promo CD of On My Way To The Big Light where Mike collaborated with Latvian band Mielaw. The CD contains a full version and a radio edit version.

A vinyl release of We Are Jonah b/w Time, Space and the Bride's Bed..

A scarce promo cassette from Japan with text based artwork.

☄ A Rock In The Weary Land Tour Merch & Memorabilia ☄

A lovely waves pin with band name that was available at some of the A Rock In The Weary Land shows in 2000. This well-made pin measures 25mm x 40mm approx. The little beauty sold out very quickly. Occasionally, one will appear for sale, so do not hesitate!

A hard-to-find set of six A Rock In The Weary Land promo postcards.

A USA promotional postcard with US tour dates on the reverse.

This is where it all started again with the relaunched band. They did a six-date tour of Norway just before their jaw-dropping performance at Glastonbury. This lovely poster is from June 2000. Thank you Kjetil.

A promo Is She Conscious? t-shirt from the Weary Land tour.

A Weary Land sweatshirt from 2000. Thank you Dag.

A Weary Land tour tee with tour dates from 2000.

A Weary Land tour tee with a fabulous print on front and tour dates from 2000.

An embroidered Weary Land cap with logo and band name.

One of the rarest of all Waterboys CDs and perhaps the hardest one of all to find, this compilation 'Open To Spirit: The Transformational Music of Mike Scott and The Waterboys' album was released in very limited numbers in 2002.

This wonderful collection contains Let It Happen and Crown.

This collection is a very unique combination of both Mike's solo songs and Waterboys material. The song selection was compiled by Janette.

Mike writes: 'This was a promotional CD created in 2002 and manufactured in small quantities for our American new age publicist of the time to distribute to new age / holistic / spiritual publications and radio stations.'

This album is a real jewel in any Waterboys collection!