Welcome to the Dag's Dungeon Page. Dag Reinert Johansen is without any doubt one of only a handful of contenders for the title of   'The #1 Waterboys collector of all the official recordings and paraphernalia'.

This page contains images of many of Dag's treasures that go far beyond the simple 'Memorabilia' tag. Many of these are classed as Historical Artefacts of  Mike Scott and the Band's recordings.

Huge thanks to him for shining a long overdue light on these         treasures and for sharing these nuggets here for all of us to see. 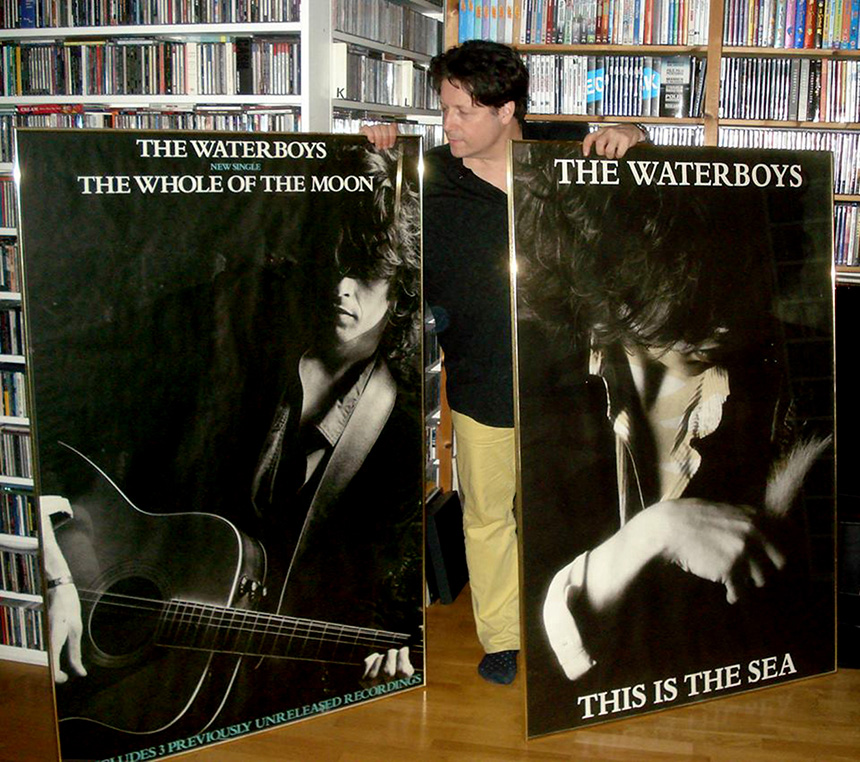 This original concert poster is a complete one-off piece. It is a giant-sized poster made of tough plastic and to be displayed outside or above the concert venue.

This unique piece of artwork was made to promote a show in Dag's hometown of Fredrikstad,    Norway in 2008.


☄ Open To Spirit: The Transformational Music of Mike Scott and The Waterboys ☄

One of the rarest of all Waterboys CD's and perhaps the hardest one of all to find, this 'Open To Spirit: The Transformational Music of Mike Scott and The Waterboys' Compilation album was released in very limited numbers in 2002.

The CD booklet contains a 'Shadow Dancer' photograph by Mike and it also contains the song lyrics.

This collection is a very unique combination of both Mike solo material and Waterboys material and the song selection was compiled by Janette.

Mike writes: 'This was a promotional CD created in 2002 and manufactured in small quantities for  our American new age publicist of the time to distribute to new age / holistic / spiritual    publications  and radio stations'.

An extremely rare proof sleeve for the planned cover art for the Big Music seven-inch single.

There are about five fully assembled Big Music sleeves known to be in some hardcore fans'   collections but this unique sleeve was never actually issued and it is highly sought after.

This is a very rare cassette that came with Another Pretty Face fanzine, which was made by     Mike in 1980.

These are 'DNV', 'Another Pretty Face' and 'Funhouse'.

This sleeve for the forthcoming Big Music 12 inch single was NEVER released to the public, instead they used a photo for the cover that was taken in the Lake District.(see Photo inset.)


☄ Church Not Made With Hands - Canadian 7-Inch single ☄

☄ This Is The Sea LP Test Pressing ☄

Two one-sided test pressings for the planned follow-up single to The Whole Of The Moon.

Probably the rarest of all the pieces on display here on this page, this is a full LP acetate of Fisherman's Blues with a different track listing and with all information on the sleeve and     record labels handwritten by Mike. This is a true one-off.

This is a rare Spanish Promo LP and 10" colour booklet set that came housed in a unique Room To Room Envelope. (See photos below.)


☄ Church Not Made With Hands - Germany ☄